A Brief Look at Caravaggio's Technique

Caravaggio was born Michelangelo Merisi, Caravaggio is the name of the artist’s home town in Lombardy in Northern Italy, where he begabn his training (one of those he trained under, Simone Peterzano had studied with Titian). His technique and the materials he used reflected his roots and his work was seen by his contempories very much in that “North Italian” context, even “Venetian”.  This was especially true of his early works, generally in genre scenes including still life – such as Boy with Fruit basket c1593 (Galleria Borghese, Rome) and “Bacchus” 1595 (Uffizi Gallery, Florence) painted when he was in his early twenties. (below)  It was in this period around 1592 at the age of 21 that Caravaggio moved to Rome, Italy’s artistic centre,  starting work in the studio of Cavaliere d’Arpino, one of the more successful panters in Rome at the time,  probably employed to specialise in still life and genre subjects. It was not until three years later, however, that his career took off after he came under the patronage of Cardinal Franceso del Monte, in whose house he lived from about 1595 to 1600.

His first important painting that set him on his way was the “Card Sharps” now in the Kimbell At Museum. To emphasise his North Italian background this painting was described as being painted in the  “…straightforward manner of Giorgione with tempered shadows” (Gian Pietro Bellori – The Lives of Modern Painters, Sculptors and Architects, Rome 1672). Nonetheless,  his innovative and striking images combined with the important acqaintances he made through Del Monte, soon made him a celebrity. 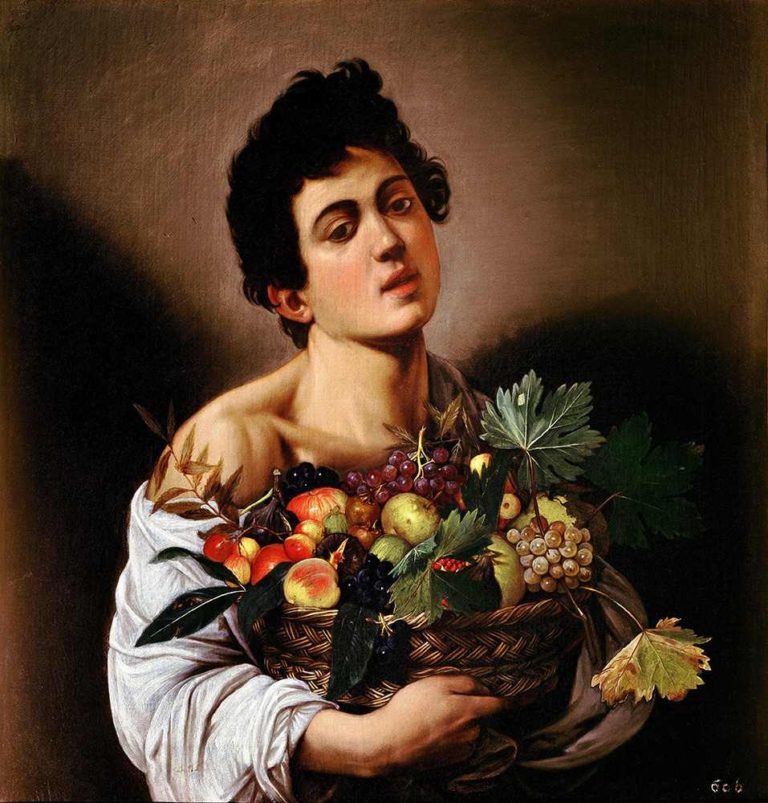 Boy With a Basket of Fruit 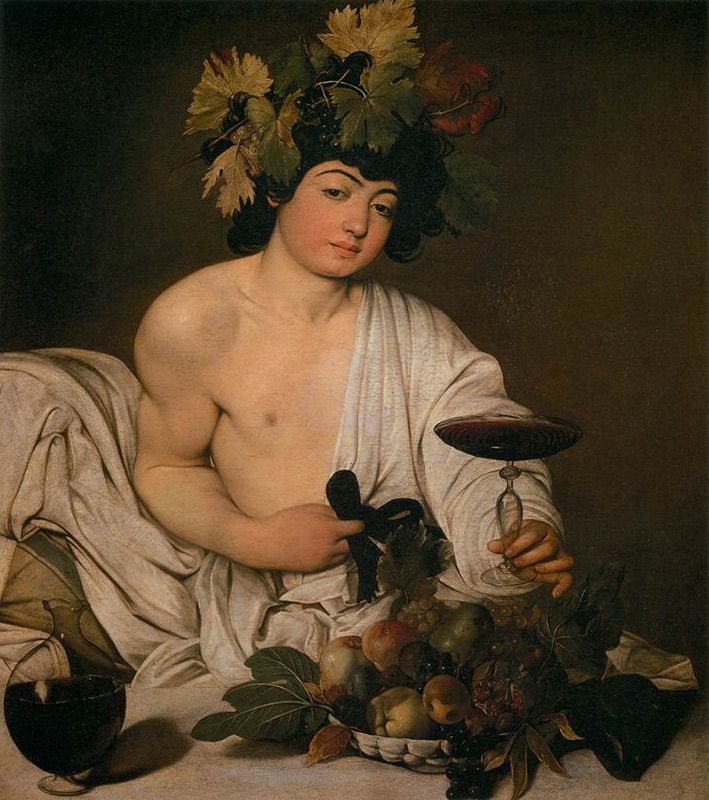 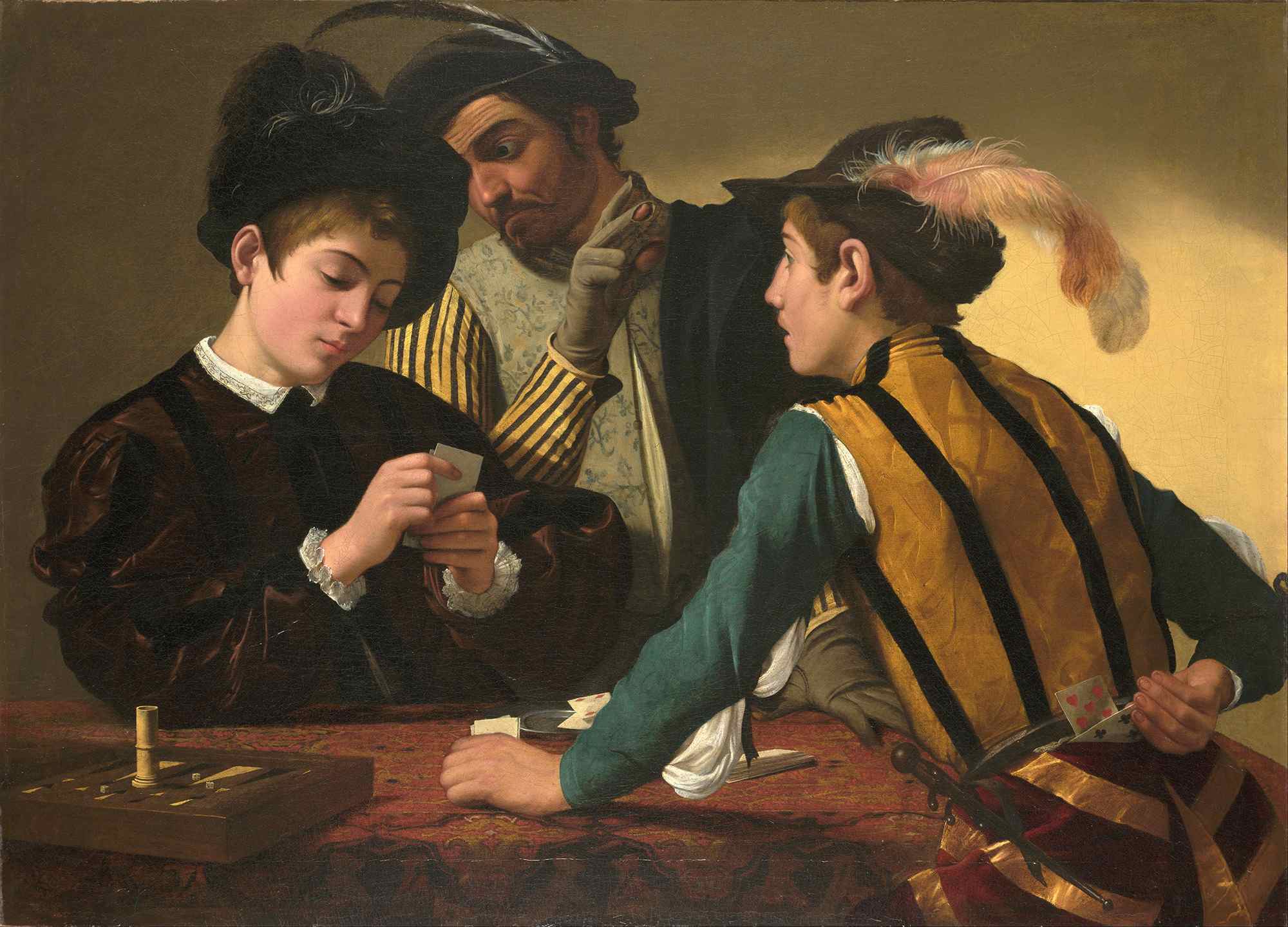 The canvas used by Caravaggio was typically linen with an animal – usually rabbit skin – glue sizing followed by an initial priming or ground layer consisting of pigment ground in oil (by Caravaggio’s time these could be purchased ready prepared). Caravaggio appeared to be not too particular about the origin of the surface he painted on as there is evidence that he sometimes painted over previously painted canvas by other artists (Still Life or The Basket of Fruit in the Biblioteca Ambrosiana in Milan or Fortune Teller – Capitoline Museum) as well as using canvas made for other purposes such as diamond patterned weave more commonly used for tablecloths (Tela di Fiandra) (Cleveland Crucifixion of St Andrew) as well as more common Tela Olona. 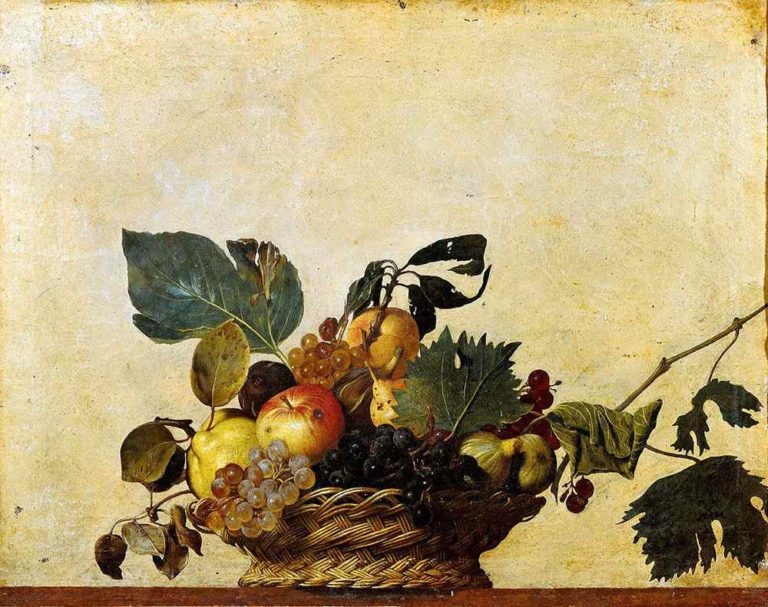 Still Life or Basket of Fruit 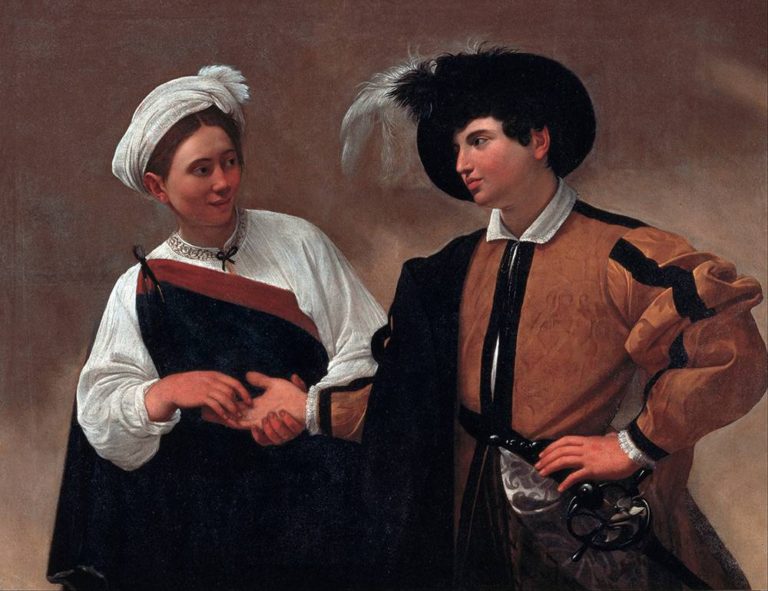 He was known at the time for not making preliminary drawings for his paintings as was the common practice – sketches that would be worked up into final full size drawings or ‘cartoon’ that was then transferred to the prepared support. He was rather known for the innovative and unusual way at the time of working directly on the canvas with live models before him, which is attested to by all of his early biographers, and it constitutes one of the fundamental novelties of his practice.

Caravaggio’s biographer Giovanni Pietro Bellori relates that  in “The Fortune Teller” the artist picked the gypsy girl out from passers-by on the street in order to show that he had no need to copy the works of the masters from antiquity:

“When he was shown the most famous statues of Phidias and Glykon in order that he might use them as models, his only answer was to point towards a crowd of people saying that nature had given him an abundance of masters.”

Bellori even suggested that Caravaggio was empty “the moment that the model is taken away from him his hand and mind become empty”. However, even at the time the limitations of working on larger compositions from live models was noted, they necessasarily having to be a collage of individual models separately posed – “…it does not work well when painting a large narrative composition, it being impossible to put  a multitude of men in a room to represent a narrative (while they) stand still to be copied.” (Guilio Mancini – ‘Considerazioni sulla pittura’ 1614-21)

By the end of the 1500’s the ground layer normally consisted of inexpensive earth pigments red earth, yellow ochre and umber plus lead white, filled out with chalk. The artist would then normally add a light grey or tan 2nd layer ground onto which the drawing was transferred and the painting begun. While Caravaggio tended to use this light ground in his early work he soon moved onto a dark red brown ground which by 1600 had become common in the rest of Italy.

This darker, ground was translucent as well as dark in colour, and its warm brown colour was exploited in his painting and used as a middle tone. Caravaggio left it visible in several areas, particularly  in the areas of flesh and hair, sometimes lightly glazed with a slightly darker paint, as was noted again by Bellori “…he left the imprimatur of the canvas for the middle tones.”

His preferred method of mapping out the various elements of the composition was to scratch incised lines into the still wet brown imprimatura ground using a stylus or the wooden end of a brush – called Abozzo, in a fairly rough, summary fashion. These freehand, scratched lines are little more than schematic indications of the key compositional elements. 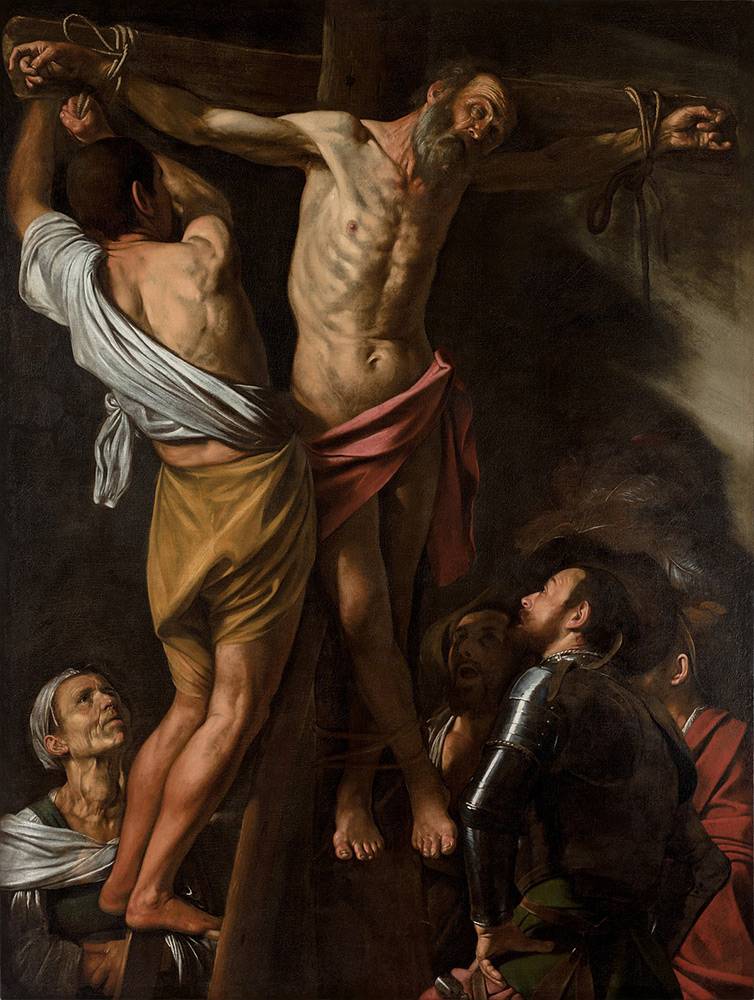 The Crucifixion of Saint Andrew

Caravaggio’s normal method of working was then to loosely with a brush, draw the outline of forms in dark brown paint which would allow for alterations in the drawing and composition  which would not then be visible under subsequent analysis, as the painted lines would be absorbed under subsequent layers of paint. He would then finally mark down the main areas of highlights in white paint.

As for laying in of the flesh areas of his compositions Caravggio developed the habit of using a pinkish red underpaint and he also generally used this colour to sketch in the ears of his figures to help position the heads and achieve correct proportions.

Caravaggio generally ground his colours in walnut oil, rather than linseed oil, it being lighter in colour probably heated with litharge to speed up drying – so called ‘black oil’. In the white highlights he used a mixture of oil and egg tempera, which produced a cooler and more opaque and thicker white than would have been possible with oil alone.

The pigments that he used were relatively few :

The vanish medium he used was a mixture of drying oils

A type of gum resin – mastic

Caravaggio in the UK

There are three works in The National Gallery in London by Caravaggio for us to be able to see at first hand his painting style and how it changed over the course of his career to a looser and broader finished style of painting..

They are “Boy Bitten by a Lizard”, “The Supper at Emmaus” and “Salome Recieves the Head of John The Baptist”. 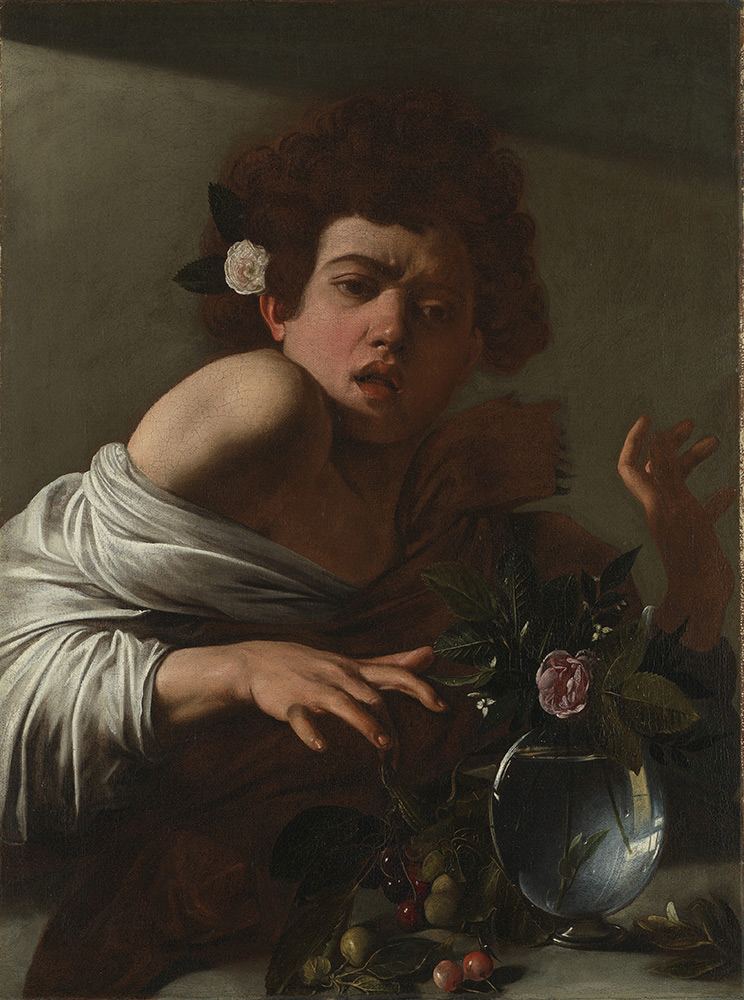 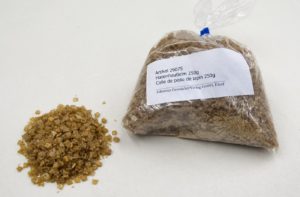 Hello from Danny and Val! Just as you in the UK are readying yourselves to 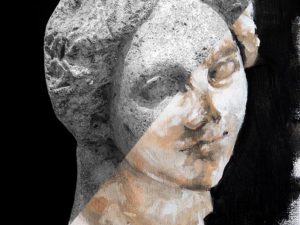